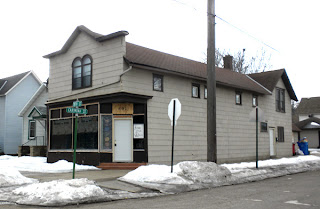 If going up to Winona and staying at the Bambenek abode at 578 East Fifth was the coolest thing in the world back in the day, hitting up the candy store at 601 East Fifth Street was the second coolest thing. When I was a kid, the candy store was owned by Mom's uncle, Ralph Bambenek (1918-1988) and aunt, Bernice Stolpa Bambenek (1919-1977). No trip was complete without multiple trips to Uncle Ralph's to stock up on penny candy and (coincidentally, I'm sure) get out of the grownups' hair, if only for a short time. Uncle Ralph was always friendly enough to us kids. Mom claimed he could make himself sneeze whenever he wanted just by looking up at the sun, which only raised his status in my eyes. Aunt Bernice was another matter. She would stand behind the huge glass counter and just glare daggers at us while we dithered over exactly what we wanted her to fish out. Too bad. If she didn't like kids, she shouldn't have married a guy who owned a candy store. Oh yes, there was a liquor store with a separate entrance on Carimona Street, which the grownups no doubt found quite convenient.

The building at 601 East Fifth has enjoyed a long and interesting history. According to the Winona Herald, it housed a private business school in the late 1880s. At the turn of the century it housed the store of Mieczyslaw J. "M.J." Kowalewski, pharmacist and city political figure, who died in a tragic car accident in 1915 at the age of 61. Interestingly, M.J. Kowalewski was not related to the Kowalewskis of Hot Fish Shop fame, nor was he even of Kashubian descent, having been born in the Poznan region. The Kowalewski family did not live in the apartment over the store, but in the house next door at 208 Carimona. Sigmund Kowalewski, the oldest son and also a pharmacist, took over for a short time; by 1917, he had relocated to Minneapolis.

The establishment then did business as Max A. Goltz and Sons (a branch of the Goltz Pharmacy at 274 East Third), and from about 1921 to 1923, by J.M. Czapiewski as the "East End Drug Store." In 1923, the "Young Ladies' Onward League" maintained a clubhouse upstairs. In April, 1923 Henry Jezewski and Lawrence Jaszewski purchased the store. On March 1, 1962 Uncle Ralph took possession of the store from Lawrence Jaszewski and operated there until Aunt Bernice's death in 1977. At that point, Mary Pendleton and Mary Bergland then purchased the store and opened up Mary Twyce Antiques and Books. Ms. Bergland soon left the business, but Ms. Pendleton kept the store open until she retired, at age 89, in 2007. At present it hosts the "Find Your Peace" art studio and yoga school - a nice return to the building's original function!