My maternal grandmother, Leokadia Weronika Pellowska was born on 16 November 1892 on the family farm in Trempealeau County, Wisconsin. She was the fifth of eleven children born to Jakub (1859-1937) and Franciszka nee Zabinska (1862-1938) Pellowski. By the time Leokadia was five, the Pellowski family had moved across the river to Winona, where her father Jake operated a saloon at 769 East Fifth Street. The saloon was evidently a family business: Jake's brother Anton Pellowski and his brother-in-law Joseph Olszewski also lived and worked there. Joe was the husband of Anna Pellowska Olszewski (1871-1844), who is the main character in Anne Pellowski's First Farm in the Valley.

But life in the big city must not have suited the Pellowski family, because Jake and Franciszka were back in Trempealeau County in time for the 1905 Wisconsin Census. By 1913 or so, Jake Pellowski was still farming, but he also operated a sawmill in Dodge. When he purchased a piece of woodworking equipment from a factory in Winona, the factory sent one Karol Bambenek (1864-1937) to accompany the equipment on the train to Dodge, and teach its new user how to operate it. For company, "Charlie" Bambenek brought along his son Jan Karol Bambenek (1891-1966); as luck had it, Leokadia Pellowska was hanging around with her dad at the sawmill. On November 17, 1914 they were married at Sacred Heart-Saint Wenceslaus Parish in Pine Creek.

My second cousin Becky Kaldunski was kind enough to share with me the beautiful picture of the Pellowski women at left, which dates back to the early 1910s. Leokadia is at upper right, standing beside her sister Wiktoria Pellowska Hermann (1888-1921). In front, from left to right, are Marianna Pellowska Kaldunski (1886-1963), Sophia Pellowska Dorava (1907-1970), Emeline Pellowska Lilla (1904-1993) and the materfamilias Franciszka herself. About the turn of the century, Polish women started to be called (at least in the English-speaking general public) by their "English" names - so this could also be called a picture of Laura, Victoria, Mary, Sophie, Emaline, and Frances. 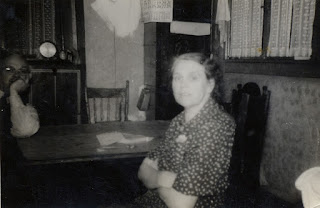 I know only a few stories about Grandmother Bambenek; she died of a heart attack in 1946, when my  Mom (who was named after her) was only thirteen. As long as I can remember, we had these two pictures in our living room; looking back on it, it was weird that our only pictures of Grandmother Bambenek were taken while she was in her coffin. But that just means I have Mom to thank for my Wisconsin Death Trip streak.Just before Mom passed away in 2003, I took the time to scan some of the family photo collection and discovered this missing gem. It was taken in the Bambenek family home at 578 East Fifth Street, and I was able to date it to February 1942 from the calendar in the background. Grandma actually looks in very nice shape for a fifty year old woman with six children ranging in age from five to twenty-seven. Grandpa looks, well, hirsute for a fifty-one year old man from whom (I am told) I inherited my own distinctively receding hairline. I could also swear that he is photobombing Grandma.