The senior branch of the Eichmann family reached the United States first, but turned out to be rather less prolific. The 1860 US Census has "Frederic and Catherine Ashman" living in Dubuque, Iowa: a tip of the hat to Larry Reski at Poland to Pine Creek for making a connection I don't think anyone else would have caught. Assigning Franciszek to Lipusz seems a pretty safe bet, but Katarzyna earns a question mark. Although the PGSA's list of Kashubian surnames associates her surname with Lipusz, I have no hard proof as of yet.

The Franciszek and Katarzyna Eichmann family interests me because its members tended to settle not in the Dodge-Pine Creek area but in Trempealeau, or in the Burnside Township hamlet of New City. Founded in 1869 alongside Traverse Creek, New City's growth was cut short in 1876 when the Green Bay and Western Railroad built a depot one mile to the northwest, creating what became the city of Independence. As was the case with Arcadia Township, the majority of Burnside Township's Polish settlers had immigrated from Silesia, a region of Germany to the southwest of Kashubia. These Silesian Polish settlers included the Bautch, Gierok, and Sura familes.

The only one of Franciszek and Katarzyna's children I have able to trace is Peter P. Eichman, (1847 Lipusz - ? Burnside) in Lipusz. The 1870 US Census lists both Franciszek and Peter as "Saloon Keeper" in Trempealeau; Katarzyna is listed as "Keeping House" and one Lewis Sekoski (a boarder, perhaps?) is listed as "Works in Grain Warehouse." The grain warehouse reference strongly suggests that the Eichmann saloon was located in the town of Trempealeau, and that the saloon Peter established in New City was a later venture. 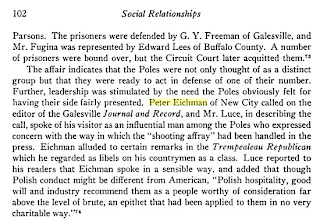 Peter must certainly have been living in New City by this time, because Merle Curti lists him on page 102 of The Making of An American Community as a leader of the local Poles. When an 1873 fracas broke out between English speakers and Silesian Poles at Fugina's tavern in New City, it escalated into a near race riot. Although he was a Kashubian living in a settlement of Silesians (and not yet thirty years old, at that), Peter stepped forth as spokesman for the Poles of New City. He accomplished his goal so well that S.S. Luce, editor of the Galesville Journal and Record, commented positively both on Peter and on the Poles of New City in a followup article. Unfortunately, Peter drops out of the US Census records after 1880. In the 1900 US Census, Marianna Moga Eichmann is listed as both "head of the family" and "married." No sign of Peter... yet.