At first, the two-story building at 557 East Second Street looks like nothing more than an exceptionally well-cared for house. However, it served for more than 80 years as a grocery - and, at times, as a dance hall and saloon. Although the grocery was operated by three separate families - in turn, the Milanowskis, the Brezas, and the Wieczoreks - it has always been known as the Milanowski grocery. 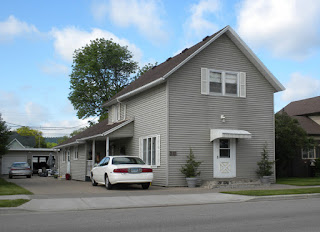 As early as 1872, Jozef Milanowski (1840-1885) was purchasing real estate on Front Street, namely Lots 10 and 11 of Block 6 of Hamilton's Addition. But according to the 1894 Winona plat map, 557 East Second Street sits on Block 9, Lot 5. So perhaps his grocery business began on Front Street; the 1880 US Census lists him as a grocer living (and presumably doing business) on Second Street. As covered in more detail on my Kashubian Cemetery Gates blog, the Milanowski family suffered a terribly when Jozef died unexpectedly at the age of forty-five. His widow, Anna Goven Milanowska (1846-1925), took charge of the grocery and eventually passed it on to their son, Hieronim "Jerome" Milanowski (1878-1940). Upon Jerome's death, the grocery was purchased by Vincent and Josephine Scharmach Breza, who passed the business on in 1957 to their daughter, Annette Breza Wieczorek and her husband, Ralph Wieczorek. The Wieczoreks closed the store in 1965 and converted it to a house, where Annette Wieczorek still lives. Until very recently, that was all I knew about the business: I had been far more interested in the Milanowski family itself. 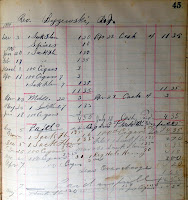 Last week, though, I had the opportunity to meet Annette Wieczorek at the Polish Museum, where she is a volunteer. It turned out she had some of the record books (or "ledgers") from the Milanowski Grocery in her basement, and was waiting for someone to pick them up. With a big grin, Father Breza generously offered my services. What a treat! One ledger contained account information for the families of Jakob Bronk, Walenty Radomski, Pawel Rudnik, and even an account for Fr. Romuald Byzewski, pastor at St. Stan's from 1875 to 1890. It would seem Father Romuald enjoyed his three-cent stogies: he bought a hundred at a time, right around once a month. The same three dollars would buy the Bronks, Radomskis, or Rudniks three sacks of flour. But if anyone on the East End deserved a little luxury, it would be the good Father! These ledgers are not only fascinating for their beautiful handwriting, but they provide a gold mine of information about how Winona's Kashubian Polish families lived back in the day.
Posted by Józef Jan Hughes at 9:43 AM