The Riot at New City, Wisconsin 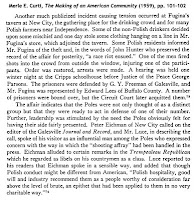 As Hieronim Derdowski observed, "There is no Kashubia without Poland and no Poland without Kashubia."

Poland, as Derdowski's words clearly imply, could not be at its greatest without embracing its entire range of ethnicities: Poles, Mazurians, Kujawians, Ukrainians, Gorals, Silesians, and Kashubians. So too with the Polish community of Winona and Trempealeau Counties. Winona is indeed the "Kashubian Capital of America," but Poles of all ethnicities have contributed to our Polish community's proud achievements. As the story of the Riot at New City demonstrates, we Poles have always stuck together. 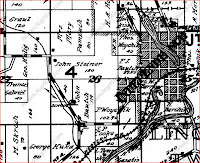 The little settlement of New City was established in Burnside Township around 1869, where Travis Creek flowed into the Trempealeau River. The first business was a mill, followed by the combination store and saloon of Michael Fugina and the tavern of Peter Eichmann. A blacksmith shop and another store appeared later. When the Green Bay and Western Railroad came through in the early 1870s, there were hopes that a depot would be built in New City. Instead, a depot was built during 1876 in the newly platted town of Independence, a mile and a half northeast. The businessmen of New City hastened to set up shop in Independence, and the site of New City has been a farm field ever since. Thanks to some careful research by La Vern Skroch, we now know the precise location... what is today a big, open field!

One could never guess it from this picture, but in the spring or summer (to judge from the reference to clothes drying on a line) of 1873 this field was the scene of what one observer called a "race riot" between Poles and English-speakers. I have taken the liberty of screen-capturing Merle E. Curti's account from his 1959 book, The Making of an American Community. For what it's worth, I believe anyone with even a passing interest in Trempealeau County history should obtain this book, since it is literally all about Trempealeau County. Best of all, good used copies are very easy to purchase online. Curti's points about the significance of this "riot" are well taken, but for the purposes of his book, only the Polish vs. English aspect is important.

Examined just a little bit more closely, the story also illustrates the traditionally friendly relationships between the Slavic population of Winona and Trempealeau Counties, and especially between Kashubian Poles and Silesian Poles. Michael Fugina (1841 Ceplje - 1901 Chicago) was a Slovene; his wife, Julia nee Woychik (1856 Popielow - 1882 Independence) was Silesian born. Peter Eichmann (1847 Lipusz - ?) was a Kashubian; his recently deceased wife, Susanna nee Sura (? Popielow - 1873 Burnside), was the daughter of the area's first Silesian settlers, Peter and Tekla nee Kachel Sura. Although the town of New City was primarily Silesian, it was the Kashubian, Peter Eichmann, who went to Galesville to speak on behalf of the community. Local educator and attorney Stephen Richmond (1848 Louisville, NY - 1912 Arcadia) remembered "Pete Eichman" as Trempealeau County's "leading saloonkeeper." Paradoxically, Peter Eichmann appears on the 1880 US Census as a "day laborer" in Independence  - and then disappears from the record entirely. That is not to say that I've given up, though.
Posted by Józef Jan Hughes at 6:56 AM