OUR BROTHER - MY HUSBAND 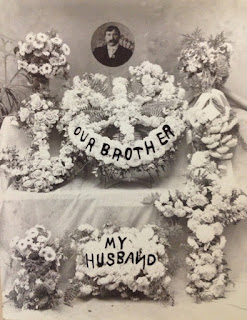 The picture at left could have come straight out of Michael Lesy's 1973 book Wisconsin Death Trip, a work I have loved and admired for literally forty years now. As Lesy observes in his Introduction,

You should know that none of the pictures were snapshots, that their deepest purpose was more religious than secular, and that commercial photography, as practiced in the 1890s, was not so much a form of applied technology as it was a semimagical act that symbolically dealt with time and mortality.

Notice the elaborate floral displays with funeral themes (the anchor, for example). The photograph of the deceased superimposed on a photo of the flowers. The plaintive inscriptions, complete with "My Husband" spelled with backwards letter N. This picture didn't speak to me. It literally cried out to me. 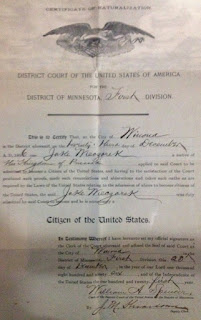 On January 16, 1894 Jacob married Marianna Cierzan (1876-1961) at Saint Stanislaus Kostka Parish. Almost two years afterward, on December 28, 1896, "Jake Wieczorek" became a naturalized citizen of the United States. The 1900 US Census shows Jacob and Marianna living at 121 Chatfield Street, with Jacob employed as a "tall sawyer" at one of the lumber mills. At some point after the census they adopted their only child, Mildred B. Wieczorek (1898-1982), who was born in New York City and came to Winona on an "orphan train." Mildred and her husband, Bernard Schultz (1896-1969) raised a family of three sons and three daughters. The originals of these scanned items were donated to the Polish Museum by their oldest son, the educator and local historian Bernard "Ben" Schultz (1923-), who was inducted into Winona's Polish Hall of Fame in 2011. 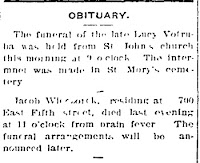 The next historical record available is a statement in the September 12, 1904 Winona Republican Herald that "Jacob Wieczorek is in a very low condition as a result of an attack of brain fever." At this point, the Winona Newspaper Project failed me temporarily. A slight flaw in the PDF scan of September 15, 1904's Republican Herald rendered this preliminary obituary invisible to the search engine. I would not have discovered it had I not, finally, drilled down to the individual issue. I have not found Jake Wieczorek's final obituary yet. Neither have I given up. Marianna never remarried, and lived as a widow for fifty-seven years.  I have been a widower for only two and a half years now. It gets less awful with time, but only slightly. I can only imagine her pain.

It would be churlish, of course, to blame the Winona Newspaper Project, which has afforded me hundreds of hours of solipsistic bliss, and which will no doubt console me well into my dotage. I think Lesy is rather too dismissive of those who have made this sort of work possible:


...each issue was reduced to the size of a stamp by technicians who had no time to notice anything but the title and date of each brittle paper rectangle they placed underneath the copy lights of their cameras.

Me, I'm just grateful to anyone and everyone who has assisted my research, intentionally or otherwise. Lesy, of course, has been a titan in my estimation ever since Wisconsin Death Trip was serialized in the Sunday Milwaukee Journal 's "Insight Magazine." But we also serve who merely remove the smiles from the boxes, dust them off, and put them where perhaps someone might find them someday... and enjoy the same flash of perception I enjoyed when I first set eyes on the floral displays from Jake Wieczorek's funeral one hundred and nine years earlier.