This post is dedicated to my cousin and dear friend, Anne Dreblow, who made it possible for me (finally!) to put all of this together, by sharing with me the portrait shown below. Looking back at my original blog post about my great-grandmother Franciszka Julianna (Nygowska) Bambenek, I was shocked and ashamed to discover how far my genealogical chops have come along since October of 2010. Even as a tyke, I knew the story about how Grandpa Bambenek's mother died when he was only five, and how his stepmother treated him and his baby sister Helen exactly as if they were her own children. Franciszka seemed (and still seems) to me like a tragic heroine. Being conducted to her grave by my Uncle Jim and Aunt Phoebe in 1988 was a moving experience for me, as was discovering her grave again - a Hail Mary on my lips - 32 years later. 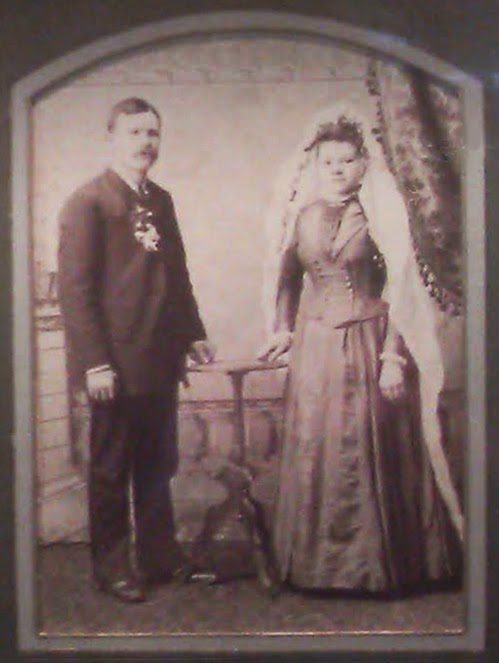 The fifteen-year-old Franciszka's decision to emigrate to the United States in 1886 was brave indeed. Her parents were both deceased; her oldest brother Walenty Nygowski was already living in Winona. Perhaps he sent for Franciska. Even so, the arduous steamship trip from Bremen to Baltimore, and from there via the railroad to Winona must have been an ordeal for a teenaged orphan who could not have possibly spoken any English.

We can but guess where Francziska lived and where she worked upon reaching Winona. Likely she worked in one of the jobs Kashubian Polish women and girls took... she was a housemaid, or a seamstress, or a washerwoman. It is anyone's guess precisely when Franciszka began seeing a young man named Karol Bambenek. Karol, too, was orphaned in his teens. After his father's premature death in 1878, he had been sent out to work on the farm of his sister and brother-in-law, Pawel and Marianna (Bambenek) Wika in Trempealeau County. But obviously, Karol was not content just to stay on the farm. By the middle 1880s his three older brothers, Wojciech, Jan Baltazar, and Walenty were all established in Winona; Jan Baltazar and Walenty were not only saloonkeepers but elected Winona officials. Two of his sisters, Weronika and Katarzyna, were married and living in Winona also.

Franciszka and Karol must have met no later than early 1889. That November, they became the parents of a daughter. The fact that the girl's parents were not yet married must not have troubled the pastor, Fr. Romuald Byzewski, or Karol's brother Jan Baltazar. Jan Baltazar and his wife Marianna were sponsors as Salomea Stanislawa Bambenek was baptized at Saint Stanislaus Kostka on November 16, 1889. Sadly, baby Salomea passed away on March 2, 1890. But Franciszka and Karol affirmed their commitment to each other when they were married at Saint Stan's on April 22, 1890, also by Fr. Byzewski.

My cousin Anne Dreblow provided me with this reproduction of what has to be Franciszka and Karol's wedding picture. It belonged to her father, John C. Bambenek, Jr. It's likely that I am acting on my presuppositions in this case, but Karol clearly looks like the more easy-going of the two. By contrast, I can see the resolve in Franciszka's eyes... she looks to me like she has dreams and ideas of how to go about them. It was not to be. Their son Jan Karol, my future grandfather John C. Bambenek Senior, was born on December 13, 1891; their daughter Helena was born on May 21, 1894. But Franciszka died of complications of childbirth on July 25, 1896. The official cause was sepsis. I have found no record of a baptism or even a birth. Just how Karol felt, I now have at least some idea. He remarried very quickly, as was common for widowers and widows alike.
Posted by Józef Jan Hughes at 12:07 AM