The Dywan family came to Winona in the 1870s, perhaps at the encouragement of Malgorzata Dywan’s older brother, Marcin Bambenek. The family tree that Uncle Jim Bambenek and Aunt Frances Rettkowski drafted 25 years ago listed one Margareta Dywan as a sister of my great-grandfather Charles Bambenek. The awesome Winona Newspaper Project shows no obituary for Wawrzyniec Dywan, but does record the deaths of Joseph (13 September 1893), Margaret (3 February 1922), John (6 December 1948), and Peter (18 June 1953) Dywan. 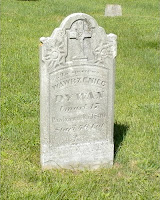 The grave of Wawrzyniec Dywan is easy to find in Saint Mary's Cemetery. This monument is close to the northern end of the Old Polish Section, and can be seen from the cemetery road.  The inscription is Tu spoczywa Wawrzeniec DYWAN, Umarl 17 Pazdziernika 1890 Stari 56 Lat: "Here lies Wawrzeniec (sic) DYWAN, died 17 October 1890, 56 years old."  From the misspelling of his first name and of the Polish adjective "stary," I am not sure that the stone was carved by a Polish speaker.

On the other hand, the headstone has held up extremely well over the last 120 years. The carvings are intact and the inscription is completely legible. It must have cost the bereaved family a fair amount of money, at a financial sacrifice which is hard to calculate: would the benefits from St. Casimir's or Saint Stanislaus's Society (provided Wawrzyniec was a member) have covered such a substantial monument? When her oldest son Joseph died in September 1893, Malgorzata spent the night by his open grave, "close up to the dense foliage of the bluffside," refusing to believe that he was in fact dead. 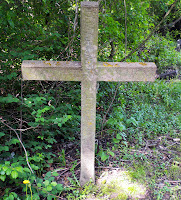 At right is the concrete headstone of Malgorzata Bambenek Dywan, which I found, completely by happenstance, on May 31, 2013 at Saint Mary's. This monument is "close up to the dense foliage of the bluffside" in the cemetery's far southeast corner, and overlooks pretty much everything to its north. The horizontal inscription, scratched into the wet concrete, is MALGORZATA DYWAN, and the vertical inscription is UMARLA 3 LUTEGO 1922 LAT 96: "Died February 3, 1922 aged 96." By this time her surviving sons, Peter and John, were both over fifty and still single. According to the census data, Peter was employed on the Chicago and Northwestern Railroad as a bridge carpenter, and John was a house painter. No fancy stone this time around; homemade cement monuments are not rare in the Old Polish Section, and this is one of the better made ones. The inscriptions are pretty well faded/eroded, but otherwise the monument is remarkably intact.
Posted by Józef Jan Hughes at 9:33 AM