One of the first articles I stumbled upon after picking up the wheelbarrow last year was Sister M. Teresa OSF's 1948 work "Polish Settlements in Minnesota 1860-1900." It's been largely eclipsed over the years but still a fascinating read. In support of her point that most of Minnesota's Polish immigrants had originally intended to return to the Old Country someday, she cited an 1864 letter from "Walenty von Radowski" of Winona to the "Polish paper Echo z Polski" requesting back issues. I didn't stop to think about the newspaper or its contents, though I have since come to see them as fascinating. Instead, I was struck at once by the writer's use of "von." Why would the presumably patriotic Pole, Pan Walenty Radowski, use a title of German nobility in the United States? To a Polish paper, no less: didn't all good Poles despise Germans? And why would a nobleman emigrate to Winona anyway? Wouldn't his chances of enhancing the von Radowski family fortunes be better back in the Old Country?

I pretty quickly found the man in question. "Val. Radowski" arrived in New York on August 4, 1860 aboard the sailing ship Elise Rabike. Also aboard the Elise Rabike was another future Winonan, Jos. Milanowski. On January 9, 1865, "Valentin Radomski" and "Anna Kawalewska" were married in Winona. The switch from Radowski to Radomski is no big deal: even the Poles themselves are challenged by Polish names. The bride had in fact been baptized Antonina Kowalska, daughter of Szymon Kowalewski and Jozefina Styncel (Sztyncel, Stencel, Stencil, etc). Mr. and Mrs. Radomski relocated to a farm in Pine Creek shortly afterward, retiring to Winona at some point between the 1905 Wisconsin Census and the 1910 US Census. 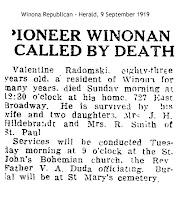 Tragically, the cemetery records from Sacred Heart-Saint Wenceslaus Parish disclose that the Radomskis buried five children there between 1869 and the cholera outbreak of 1877. The available census information is confusing. It discloses a daughter Paulina (born 1886) and a son Leon (born 1889), along with a grandson or two. The 1919 obituary with its headline PIONEER WINONAN CALLED BY DEATH does not reference Leon, who was called by death on June 26, 1916. Paulina is the Mrs. Hildebrandt mentioned; she died without issue in 1929. I am still trying to identify Mrs. R. Smith of St. Paul, and to find Antonina Kowalewska Radomski's date of death. I would dearly love to find surviving descendants of Walenty and Antonina nee Kowalewska Radomski somewhere on this planet. Wish me luck. The "von" still remains a mystery to me, though.

I have no problem believing Walenty Radowski was an highly intelligent and educated man; his younger brother Wawrzyniec (1838-1915) was a longtime schoolteacher in Prussian Poland before emigrating to Winona with his family in 1887. If, in fact, he intended to return to the Old Country someday, his interest in Polish affairs was understandable. But Echo z Polski turns out to have been a New York publication, founded in 1863 by supporters of the January 1863 insurrection against the Russians. Its purpose, according to James S. Pula, was to reprint European articles concerning the insurrection and to build support within the nascent American Polonia. When the insurrection failed, so did Echo z Polski. Still the question remains: was Walenty interested in returning to Poland and joining the fight? If so, this would indicate that Walenty already identified to some extent as a Pole in addition to (or even instead of) a Kashubian Catholic boy from the region of Koscierzyna. I myself tend to think that most of Winona's Kashubian Poles came to consider themselves as Polacy only after they had settled down in the United States. More likely, Walenty was an unusually well educated young Kashubian Pole. It would be interesting to know why he and Antonina decided to farm across the river in Pine Creek when he could have stayed in Winona and pursued a political career like his old traveling buddy Jozef Milanowski. Perhaps his inner Kashubian got the better of his inner Pole?

Posted by Józef Jan Hughes at 6:18 AM