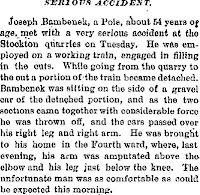 Jozef (1827 Trzebun -1883 Winona) and Marianna née Pelowska (1836 Rotembark -1913 Winona) Bambenek seem to have emigrated to Winona after 1875. Jozef was a third cousin to Martin Bambenek, who emigrated to Winona in 1867 or 1868. He was employed on the Chicago and Northwestern Railroad. On January 2, 1883 he was working on a gravel train which was filling in cuts and trestles in the Stockton area, when a gravel car rolled over his right arm and right leg. He was taken not to a hospital, but to his home. Although the Winona Daily Republican reported he was "as comfortable as could be expected," he died not long afterward.

Michael Bambenek's son, Michael Bambenek, Jr. (1902-1982) served first as athletic director at Alliance College (the college of the Polish National Alliance) and then as Winona’s Director of Recreation from 1940 to 1968. After his retirement, Mike Bambenek Field was named in his honor.