The new background of my home page comes from a postcard picture of Winona, produced circa 1905. Beautiful, no? 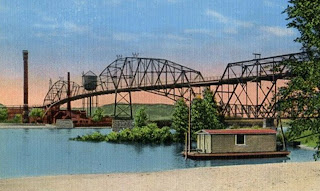 The view is looking north (the Mississippi runs from west to east as it passes Winona) not from the Wisconsin shore, but from Island No. 72, which belongs to Minnesota and is also known as Latsch Island. In the foreground is the 1891 High Wagon Bridge, dismantled for scrap after the current highway bridge was finished in 1941. Behind the High Wagon Bridge is the Chicago and Northwestern's 1872 railroad bridge, a segment of which still survives.

What looks like a smokestack at left is actually a 210' standpipe - a sort of water tower - fed by wells. Apparently the good people of Winona didn't drink from the Mississippi even back then, the lovely blue water notwithstanding. But then, the sun doesn't rise in the North either. The artist who tinted this picture may have been handy with oils and watercolors, but had obviously never been to Winona.

Strangely enough, this doesn't detract one bit from my enjoyment of the postcard picture. When I was up in Winona last week, the postcard picture kept popping up in my mind. I even considered driving down to Latsch Island to take a photograph from its vantage point. But I thought better of it. I took lots of pictures in Winona this time, the way I always do. But some images are best left in the back of one's mind.

The metaphor of life as a road was well trodden even when Gilgamesh was a pup, but still, I could think of no better place for the end of my road. A river. A rising sun. And on the horizon, Winona. I could walk over the wagon bridge even though Dad warned me he was afraid to do it as a kid. Or I could take a Northwestern passenger train, or hop a Green Bay and Western freight like Grandpa Bambenek did. The choice I find most appealing, though, is the boat. I could walk aboard, introduce myself to the ferryman and shake his big blue-gray paw before beginning my leisurely ride into Heaven.
Posted by Józef Jan Hughes at 7:21 PM