So We Gravely Read The Stones

It's hard to believe I originally posted this almost five years ago, on my old blog, "Bright Yellow Gun." The statistics don't lie, though. Here are some of my cemetery visit musings from July 3, 2008: 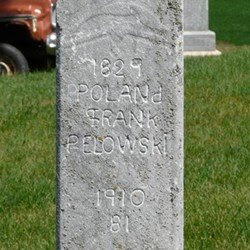 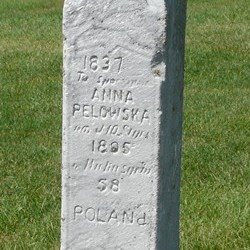 I am reasonably sure that Frank and Anna were not Hungarians at all, but Kaszubian Poles. Family tradition has it that they spent their first winter in the Valley in a dugout Frank carved, literally, out of the valley. If, in fact, the Pelowski family did this in 1865, they must have wandered about the States for a while; my great-grandfather Jacob Pellowski (1859-1937) was born on the boat to America.

"Reasonably sure," "tradition has it," "they must have wandered." Even back then, I realized I had an awful lot to learn.

But nothing could have prepared me for the lessons to come. I could not know, for instance, that in the not so distant future I would learn at first hand the grief Frank Pelowski felt as he lay his beloved Anna to rest on the hill in Pine Creek. Nor did I ever envision my reciting this at the graveside of my beloved kitten and wife Moopy. Over the last two years, as the past has become even more an integral part of my present, I have accumulated a great deal more information about Frank and Anna Pelowski, and about my other Kashubian forebears. I am also learning how to ask better questions about them.

When Anna died in 1895, her monument was inscribed in the traditional Polish manner and in the Polish language: "Tu Spoczywa" (here rests), her name, the date of her death, and her age at death. From the photo above, it's clear that Frank's monument was purchased and set up at the same time. But after Frank died in 1910, his monument was inscribed rather differently. Only the dates of his birth and death are given, with nothing at all in the Polish language. Indeed, his first name is given as the Anglicized "Frank" instead of the original Polish "Franciszek." Above his Anglicized name is engraved the English word POLANd. Anna's monument was obviously modified at the same time to include her date of birth (1837) and, again, the English word POLANd.

What's in a word? My research indicates that Frank and Anna left the old country in 1859 with little or no sense of being from POLANd. They had been born Prussian subjects; Frank had even been baptized as "Franz" and had served in the Prussian Army. They no doubt spoke Polish at church; actual persecution of Poles and Catholics occurred only after the unification of Germany in 1870. The language they spoke at home, however, was Kashubian. To this day some consider Kashubian a mere dialect of Polish, largely because there has never been a country called "Kashubia." The fact remains, though, that Kashubian is still but barely intelligible to even the most cultured and well-meaning of native Polish speakers. I have no doubt that Frank and Anna thought of themselves mostly as farmers from the Roman Catholic parish called Berent by the Germans, Kościerzyna by the Polish, and, by Kashubians like themselves, Kòscérzëna.

Just when and how Anna (and especially Frank) came to think of themselves as having been born in POLANd is still a mystery to me. The English-speakers they encountered upon their arrival in the United States identified them as Polish. The 1860 US Census lists "Franz and Hannah Palaski" as born in POLANd; the 1870 census lists "Frank and Anna Plewski" as born in Prussia. After the American Civil War, Poles poured into the United States from the German, Austrian and Russian partitions; most headed for the big cities of Buffalo, Detroit, Chicago and Milwaukee to work in the factories there. The resulting conception of "Polonia" - a new POLANd comprised of colonies existing within the United States - did not make allowances for Kashubians and their strange language. The more cosmopolitan Kashubian community of Winona came to consider itself "Polish" as early as the middle 1870s. To judge from the Pelowskis' evidence, though, identification with POLANd percolated out to Pine Creek rather later.

I'm still clearing the dust from the smiles in that particular box.

Posted by Józef Jan Hughes at 8:07 AM No comments: