In May 1945, Alex and Anna Pellowski of rural Dodge, Wisconsin learned that their son, PFC Lawrence J. Pellowski, had been killed in action on Okinawa on April 20th. Alex Pellowski was the younger brother of my maternal grandmother, Leocadia (Laura) Pellowski Bambenek. This meant that Lawrence was my mom's first cousin. 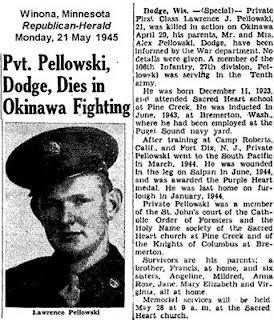 Mom did not remember Lawrence very well - he was ten years Mom's senior; a serious young man who seldom bothered with silly little girl cousins (and I'm sure Mom was very silly even by little girl standards). When Lawrence graduated from high school on 1941, he moved to Seattle to work in the shipbuilding industry. Something big was about to happen and he didn't want to be deep in the Trempealeau County hills when it started. Mom was far closer to Lawrence's sister Anna Rose, a studious girl exactly her own age who eventually became her high school classmate. Even so, Mom remembered for the rest of her life her shock upon learning of Lawrence's death.. She had only been four when her grandmother and both of her grandfathers died - too young to know them very well and far too young to comprehend what had happened. Dealing with the news that Lawrence would never play tricks on his city slicker cousins from Winona again - that was another matter. 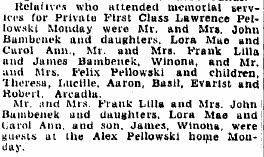 "Lora Mae" and "Anna Rose" went on to long and well-lived lives. Laura Mae Bambenek went to work as a telephone operator; she met and married a railroader from Winona named Ray Hughes and moved with him to Racine, Wisconsin, where they started their family. Their older son is a college professor, their younger son is a school superintendent, and their daughter is a pharmacist. Anne Pellowski (who is still, happily, alive and well and active) studied at Columbia and in Munich and, after that, worked as an administrator at UNICEF. She has published five books in a series, chronicling farm life in Wisconsin as seen through the eyes of five generations of Polish-American farm girls. Although they are written primarily for children, I personally know they make wonderful reading regardless of one's age - or gender or ethnic background or affinity for farm life.

PFC Lawrence Pellowski lies buried near his parents in Sacred Heart Cemetery, in Pine Creek, Wisconsin. He only lived to be twenty-one. Though his life could (and should) have been much longer and happier, it was certainly no less well lived. He was one of hundreds of thousands of brave men and women who fought and gave their lives so that their fellow Americans could live in freedom and security. Simply put, accomplishments like his make all of our accomplishments possible. We Americans owe our war dead and our veterans and our serving military a great debt - not just on Veteran's Day but 365 days a year.
Posted by Józef Jan Hughes at 11:17 AM