Hail to the (Winona) Chiefs!

Like all good Kashubian boys and girls, I was raised Roman Catholic. But looking back over the years, I think I could just as easily list my religion as "baseball." Rivers of ink have been spilled and countless electrons slaughtered explaining why baseball is a religion. Some of it makes for pretty good reading, but it's not necessary reading for those of us already "in the know." And being Laura Mae Bambenek's oldest son, I suspect I was born "in the know."

Mom certainly told us kids stories of the Winona Chiefs and their fearless leader, Max Molock. Sad to say, though, I was most impressed that his name rhymed with "Polack." Back in early 1970s Milwaukee, the Chiefs couldn't begin to compete with the Milwaukee Brewers. The Brewers were pretty awful back then, but we all backed our True Blue Brew Crew. They didn't make 'em any truer and bluer than Mom. I mean, I rooted for the Brewers too, but Mom listened to them, watched them, read about them, and even kept score during their games. And talked about them. God, how she talked about them. It was pretty cool being the only one of my friends whose Mom really understood baseball, but it wasn't always easy keeping up with her. I can't even guess how many Brewers games she toted us (and Dad) to, but my favorite memories are of the games she and I attended together.

Reading Kent Stever's wonderful new book, Growing Up on the Mississippi: 1950s Winona, Minnesota, has filled in another part of the picture for me. Stever has a flair for making old Winona stories come alive - even if (like me) you never lived in Winona and (also like me) weren't even alive in the 1950s. I won't try to summarize, because if you are reading this blog, you are interested in Winona - and if you are interested in Winona, you need to own Growing Up on the Mississippi. I couldn't help but be delighted by this description of Gabrych Park:


These were evenings to remember. Thousands of local townspeople and neighboring farmers crowded into Gabrych Park, a high-ceilinged structure built on donated land in memory of a war hero from the East End neighborhood of the park. It was a monument to the ambition and dedication of Polish-Americans who had settled on their “shotgun,” forty-foot lots in the 1870s—not far from the Mississippi River and the logging industry that brought them here. Along with their immense and marvelous St. Stanislaus Polish-Catholic Church a few blocks away, this field of dreams was a major source of pride to all.

This is much more than a mere name-check. Stever clearly appreciates how Winona's Kashubian Polish community was (and remains) part of the fiber of Winona's history. He also points out that the Winona Chiefs were a rebranded version of the PNA (Polish National Alliance) baseball team which had flourished in Winona for decades. Score another one for us Kashubians!


The Chiefs were our super-stars and heroes of summer. They related to baseball-minded young boys, to wide-eyed local girls of all ages and to fathers and family members who plunked down the 35 cent admission. A night at the ballpark was an escape from day jobs in the factories and processing plants with their ever-so-repetitious tasks. Some slugged cattle or hogs all day in the packing plant, while others watched the continuous welds of links of chain pass by their station in the excessive warmth of the riverside Peerless Chain Factory...

I can very easily see my Mom as one of those "wide-eyed local girls." In fact, Mom was so crazy about the Chiefs, that she and her friends would take the train to watch their heroes play on the road. Here she is (at far left) with some of her pals at the Chicago Great Western station in Dodge Center, MN, circa 1950, on her way to watch the Chiefs somewhere. Even back in the day, Mom took her baseball extremely seriously! 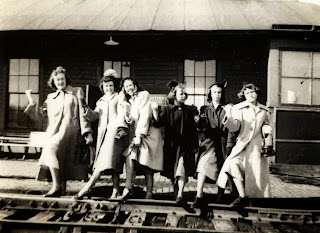