For every day of her seventy years on this planet, my beloved Mom was proud to be a 100% Polish-American from Winona, Minnesota. She had no idea that she was really of Kashubian Polish descent, but that's all right. Her parents didn't know they were Kashubians either. At any rate, Mom took great pains to make sure her three children took pride in their Polish heritage. For example, she taught us to sing the first verse and the chorus of the Polish national anthem, which began with the stirring line

At the time, the words themselves meant nothing to any of us, not even Mom. Had she known that Poland was not yet dead, she would have told us and we would have remembered it. Still, after all this time I am pleased that the Old Country gibberish I learned as a kid was in fact pretty close to what patriotic Poles sing proudly today. Mom also used certain "Polish" expressions and words, one of which I still remember. In our household, a kitchen washcloth was always referred to as a poomyvook. To this day, I still use a poomyvook to wash my dishes. It makes me feel closer to my Mom.

I also felt closer to my Mom last week as I marched with fellow members of the Kashubian-Pomeranian Organization at this year's World Kashubian Meeting. I am proud and happy to be a Kashubian. I embrace being a Kashubian. I was in Poland to be with my fellow Kashubians and, hopefully, to find out what being a Kashubian American means. There are many Kashubian Poles to tell the Kashubian Polish story; I would soon be meeting again with one of the most famous, Father Wladyslaw Szulist of Lipusz. There are Kashubian Canadians who have written extensively about the Kashubian Canadian story. There exists no English-language book which comes close to telling the story of Kashubian emigrants to the United States. And even if there were, I have come to Kashubia on a pilgrimage - to learn the things about being Kashubian which cannot be taught by books. 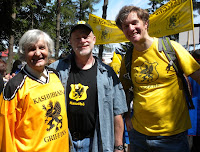 As I wandered down the streets of Wladyslawowo after the parade, I was approached by two friendly men wearing gold and black shirts. One was an older man with distinguished looking gray hair. He was wearing a black and gold shirt inscribed "KASHUBIAN GRIFFINS." He excused himself and politely asked in English if I was Professor Hughes. "Yes, I am," I said. "Who might you be?" I thought to myself. He introduced himself as Marian Jelinski of Zukowo. He had read my Wikipedia articles on Kashubian subjects and found out on Facebook that I would be attending this year's World Kashubian Meeting. He had brought me a gift. I was now the owner of the Polish-English-Kashubian Dictionary compiled by Marian Jelinski and David Shulist. I had been trying to find and purchase this book for more than a year. And just now one of the authors had walked up to me on the street in Poland, introduced himself, and presented me with an inscribed copy! 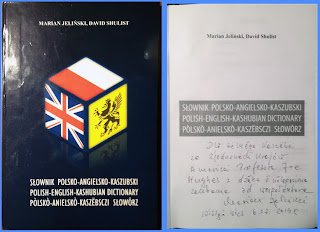 Unexpectedly receiving a copy of this coveted book was the first of several epiphanies I would have on my trip. The concise, no-nonsense version of my experiences can be found in the trip report I posted earlier this week. The full effect of my experiences will have to rattle around in my mind a little bit more before I commit them to words. But I left Kashubia, and left Poland with a firm sense that these crazy Kashubians were truly my people, and that I was truly one of them. Moreover, if anybody was going to tell the story in English of the Kashubians who came to the United States, it would have to start with me. The entire story will require someone younger, trained as a historian, and who possesses fluency in Polish. But a history of the Kashubian Americans of Winona is within my reach. More than that, it is within my heart. 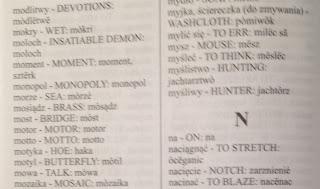 I packed up quite a few pounds' worth of books on this trip to Poland. My checked baggage clocked in at 22.7 kilograms - that's 49.9 lbs: maybe an ounce and a half under the limit. My new dictionary traveled with me on the plane. It sits on the table next to my bed, where I often look at it before I fall asleep. Not that I will ever learn Polish in this lifetime, much less Kashubian - which is considered more difficult. But I like to pronounce random Kashubian words to myself as I fall asleep, hoping someday I may at least get that much right. Two nights ago I saw, in the upper right hand corner of page 22, an old childhood memory. In "good" Polish, the word for washcloth is myjka or ściereczka. The Kashubian word for washcloth is... pòmiwôk.

Poomyvook. Pòmiwôk. So my Mom had been speaking some Kashubian to us kids after all. Without even knowing it, admittedly. Even so, she had successfully passed the torch to her firstborn. It is his turn to pass it on to someone else... brighter and stronger. The humble washcloth has given point to my pilgrimage.
Posted by Józef Jan Hughes at 9:43 PM