It has taken a little time, but I believe I have the Sikorski families of Winona. This is particularly important because two separate Sikorskis - Teofil Jakob Sikorski (1840-1913) and Ludwik "Louis" Sikorski (1845-1902) - were prominent early leaders among Winona's Kashubian community. Although both were born in the Bytow region, their branches of the Sikorski family seem to have been connected only by marriage. Since the most numerous branch was that of Teofil (also known as "Theodore," "Jacob," and even "T.J.") I will deal here with the branch headed by his father, Marcin Sikorski. 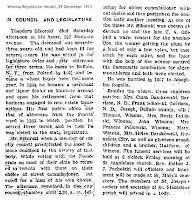 Marcin Sikorski had nine children with his second wife, Anna Janta Połczyńska; two emigrated to Winona. Teofil Jakob Sikorski married Jozefina Rogalla (1851-1932) in 1867 at Winona. Jozefina's surname strongly suggests Silesian descent but is actually Kashubian, per Father Rekowski's list. Teofil and Jozefina had eleven children, ten of whom lived to adulthood. Teofil served three terms as alderman and was elected to the Minnesota State legislature in 1900; he also played an important role in the "Battle of St. Stan's" in the early 1890s. Maciej Sikorski (1846-1830) also married a Silesian Pole, Tekla Malik (1854-1936) at Winona in 1872. Maciej and Tekla had ten children; I have not yet had the time to investigate their family further. In any event, it is a very safe bet that there are numerous descendants of Marcin Sikorski living among the Kashubian American community to this very day!
Posted by Józef Jan Hughes at 10:29 AM