Jakub (James) Gara was born on March 3, 1875 in the coal mining village of Jawiszowice, which is roughly 50 miles west of Krakow in modern Poland. He was one of ten children born to Jan and Sofia (Chromik) Gara; his older brother Andrew (1859-1922) was also a priest of the Diocese of La Crosse. Unlike Andrew, who studied for the priesthood in Rome before being ordained at La Crosse, Jakub pursued his vocation after emigrating to America in 1893. After attending seminaries in Detroit and then Milwaukee, Jakub was ordained to the priesthood on January 6, 1898 at La Crosse.

Father Gara's first few years as a priest were spent pastoring small parishes in the logging towns of northern Wisconsin. On June 19, 1904 he became pastor of Sacred Heart-Saint Wenceslaus Church in the largely Kashubian community of Pine Creek, Wisconsin. Until this time, it was common for Polish-speaking priests to move frequently from one parish to another. Father Gara's longest serving predecessor, Father Dominik Majer, had been pastor in Pine Creek for six years, from 1878 to 1884. His own older brother, Father Andrew Gara, had served the parish from 1898 to 1901. Father James Gara would serve as pastor of Sacred Heart-Saint Wenceslaus until his death at the age of 62 on December 29, 1937.

As pastor of Sacred Heart-Saint Wenceslaus, Father Gara was of course at the center of the local Catholic community. In these days, the word of the pastor in a Roman Catholic parish was virtually law. Since Pine Creek and the nearby town of Dodge were nearly 100% Roman Catholic, this role was even more significant. Although the majority of his parishioners spoke Kashubian Polish as their native language, and not "good" Polish, Father Gara immediately became the honored and revered leader of Dodge-Pine Creek's Catholics. Sacred Heart-Saint Wenceslaus's buildings and furnishings were maintained in excellent shape, and new structures were built as needed. The parish itself remained debt free, no small accomplishment during the Great Depression. Father Gara's forceful preaching and powerful oratory were also well known across the river among Winona's Kaszubian Polish community; as Rector of the Pine Creek Deanery he provided crucial assistance to the Bishop of the La Crosse Diocese.

Yet Father Gara's devotion to Sacred Heart-Saint Wenceslaus was most obvious in his everyday attention to his people's spiritual needs. Over his more than three decades as pastor he performed countless baptisms, weddings and funerals. He heard thousands upon thousands of hours' worth of confessions. He was always prepared to go out and attend to a parishioner in distress, regardless of the time or the distance involved. Despite his high status in the community, Father Gara always remained a man of the people. Ron Galewski recounts how the popular priest enjoyed stopping by the saloons of Dodge and Pine Creek to buy a round for the house, and laughed as the lucky beneficiaries joked about where their Sunday collection money was going. 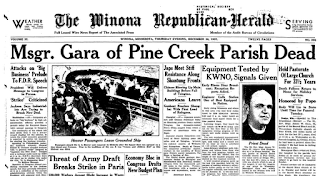 Years of this service took its toll on Father Gara's health. On June 24, 1936, he was elevated to the rank of Domestic Prelate by Pope Pius XI, with the title of Monsignor. On September 21, 1936 he was formally invested in this role at Sacred Heart-Saint Wenceslaus by Bishop Alexander J. McGavick of LaCrosse, as around one hundred area priests and other dignitaries looked on. Yet shortly afterward, the new Monsignor Gara was assigned an assistant pastor to help him in his duties. On December 7, 1937, Monsignor Gara was admitted to Saint Francis Hospital in La Crosse. He insisted on returning to his beloved parish for the Christmas services but was forced to go back to the hospital in days. He would not live to see the new year.

More than 1,500 people attended Monsignor Gara's funeral at Sacred Heart-Saint Wenceslaus on January 3, 1938. The mourners included priests and nuns from all around Wisconsin and Minnesota, other local dignitaries, and (of course) his beloved parishioners. According to the Winona Republican-Herald for January 5, 1938, many of those in attendance had to stand outside the church. He lies buried among his flock in Sacred Heart Cemetery, where his grave looks out over the church and the countryside he loved and served so well and for so long. Out of all the selfless priests and sisters and brothers who have served Sacred Heart-Saint Wenceslaus over its 150 years of existence, Monsignor James W. Gara best exemplifies the role they have played in the life of the parish.
Posted by Józef Jan Hughes at 8:08 AM