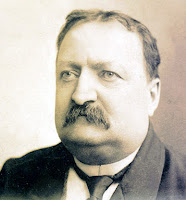 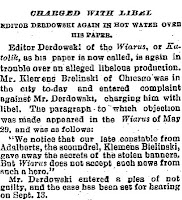 Sadly, Derdowski did not have long to live. He had never fully recovered from a 1902 stroke, and providing for Joanna and their two daughters, Harriet and Helen, was always a strain. He was able to eke out a living with Wiarus and by running a printing business on the side. . Sadly, his death in 1902 was scarcely even noticed by the Republican-Herald. Joanna Derdowska kept up the good fight, running Wiarus until 1915, when she sold the newspaper and moved with her daughters to Saint Paul. Paradoxically, Pani Derdowska's death in 1929 was marked by a much greater expression of the debt Winona owed to her and her larger than life husband.
Posted by Józef Jan Hughes at 7:27 AM