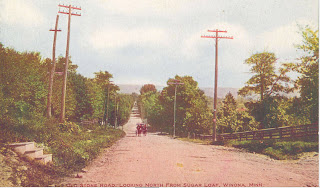 Mankato Avenue has an extremely interesting history. The postcard at left shows it as "The Old Stone Road" -  an important intercity arterial, running from Winona's southern boundary along east end of Lake Winona and continuing along the east end of Sugar Loaf up to the prairies beyond. Myself, I think of Mankato Avenue as the "Main Street of Kashubian America" for the numbers of Kashubian Poles and Kashubian Polish businesses to be found along it. But that is another blog post. Today, Mankato Avenue veers southeastward right around the Riverport Inn, as it heads toward the Highway 61 intersection. But this was not always the case. Andrew Munsch, the proprietor of deadpioneer.com, points out that Mankato Avenue - or "The Old Stone Road" - once headed directly out of Winona along what is now Sugar Loaf Road. 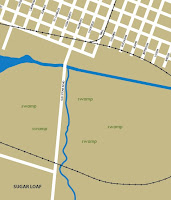 Although "The Old Stone Road" referenced in the picture is now Sugar Loaf Road, you can get a definite idea of what it was like to come into Winona from the south, one hundred years ago. Having come into Winona along Mankato Avenue literally dozens of times as a kid, I find this to be a pretty incredible visual. If you look closely you can see the Wisconsin bluffs to the north. The road just to the left of the carriage is Lake Boulevard. At the bottom of the hill is the Winona and South-Western Railroad, later the Chicago Great Western Railway. As one headed north toward Winona, the road would become somewhat wider and would eventually become paved with bricks. As "The Old Stone Road" passed through the marsh land to the east of Lake Winona, it was more like a causeway, built over a swamp, than it was like a street. After a short and slight jog to the right, the "Old Stone Road" intersected with East Mark Street and, shortly afterward, the Milwaukee Road's Chicago-Twin Cities mainline.

Today, of course, the view is quite different. As this picture by Andrew Munsch shows, one can still look straight down Mankato Avenue from what is now Sugar Loaf Road. But what was once a marsh now contains Winona Health, Target, Wal-Mart, Mills Fleet Farm, the Riverport Inn, and countless other businesses. The Winona and South-Western's right of way along the south end of Lake Winona is long gone: the tracks were pulled up in the 1930s and the four-lane US Highway 61 was built in their place during the 1950s. Next time you are in the vicinity, you might consider a short visit to Sugar Loaf Road and looking down into Winona from the top of that little hill. It was a postcard-quality view at the turn of the 20th century and it is still a nice (and informative) view today!

Special thanks to Andrew Munsch for all of his spectacular work on the history of Highway 61 - the main street of my life.