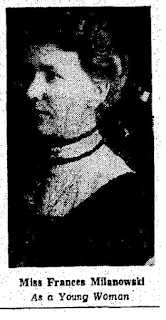 I have a little trouble imagining Franciszka Joanna Milanowska (1883-1964) - in the Winona Daily News's words - as a Young Woman. She looks very serious to me, even by formal portrait standards. Even by the standards of her time, Miss Frances Milanowski had to be an unusually determined Young Woman.

Frances had just turned two years old when her father, the grocer and Fourth Ward alderman Jozef Milanowski, died suddenly and unexpectedly at the age forty-five, on April 4, 1885. Frances's mother, Anna Goven Milanowski, never remarried, but she didn't just retire into widowhood either. Instead, Anna took over the Milanowski family grocery store at 557 East Second Street, eventually becoming one of exactly two female members of the Winona Retail Grocer's Association as "Mrs. J. Milanowski." Her daughter Frances's choice of life and livelihood was likewise unique for a young Kashubian Polish woman of her time.

Young Kashubian Polish women tended to one or the other of two "career tracks." Their traditional role was that of wife and mother; even if a Young Woman held a job after finishing her schooling it was only a temporary phase while the rest of her life sorted itself out. This held true for Winona's young Kashubian Polish women into the 1960s. My mother, Laura Bambenek, worked as a telephone operator before leaving her father's house and becoming Mrs. Raymond Hughes. Her big sister Betty taught home economics before leaving the family abode and becoming Mrs. Gene Wieczorek. And so on.

The other "career track" was that of a nun in one or another of the various religious orders which served the Kashubian Polish community. Like all Poles, Kashubians are very devout Roman Catholics. The prospect of religious life undoubtedly had a strong appeal for Winona's Kashubian Polish children, but I would guess this was especially true for the girls. At the turn of the 20th century, men had a far wider range of occupations open to them; they could achieve financial security whether married or not. A woman who never married was not only likely to earn far less over her lifetime than a bachelor her age, but also likely to end her days boarding with the family of a sibling or nephew or niece. In a religious order, on the other hand, a woman could spend her life fulfilling her vocation - free from the concerns of raising a family and earning a living. No doubt the dozens of Saint Stanislaus girls who entered the convent were moved by admiration the Sisters who taught them their lessons and contributed to parish live in so many uncounted ways. 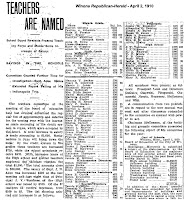 Frances chose to become a teacher without entering religious life. The young unmarried schoolteacher - or "schoolmarm" -  had been a fixture in American society for more than a century. But a young unmarried Kashubian Polish "schoolmarm" was a novelty in Winona. There was no question of Frances's personal piety: she remained a devout and involved member of Saint Stanislaus all her life. I would guess she felt too independent to let somebody else call the shots in her life, be it a husband or a Mother Superior. Instead of becoming a Mrs. or a Sister, she entered the Winona Normal School, graduating in 1905. In 1907 she began teaching third grade at what became Washington-Kosciusko Elementary School on Mankato Avenue (which I have come to consider "the Main Street of American Kashubia." A Winona Republican-Herald article of April 2, 1910 listing the salaries of Winona's 87 public school teachers yields exactly one Kashubian Polish name: Frances Milanowski. She retired in the spring of 1948 after 41 years of service to the Winona School District.

Just prior to her retirement, Frances Milanowski made the first of several gifts to Saint Stanislaus Kostka Parish. In 1947, swearing the pastor, Fr. Nicephore Grulkowski to secrecy, she paid out of her pocket for the establishment of School band - instruments, music, uniforms, and all. In 1952, she became the first lay teacher at Saint Stan's School. At first she was just filling in for one of the Sisters who had taken ill. But she took a full time position in 1954, retiring a second time in 1957. Upon her death in 1964 she left her estate, totaling $89,834.75,  to Saint Stan's. How on earth could a "schoolmarm" acquire the equivalent of $667,327.30 in 2013 dollars? No doubt she was a typically thrifty Kashubian. No doubt she was a very shrewd investor. The answer likely has to do with owning stock in Peerless Chain Company, founded in 1917 by her nephews Joe, Dick, and Al Bambenek: the sons of her oldest sister Barbara Milanowska Bambenek.

Frances's funeral Mass on August 6, 1964 was celebrated by no less than four priests, with five other priests "present in the sanctuary" according to the Winona Daily News. No ordinary sendoff for this great servant of the Kashubian Polish community and Saint Stanislaus Kostka Parish. But then Franciszka Joanna Milanowska was no ordinary woman. She was likely the first Kashubian Polish woman from Winona to make a name for herself independently from marriage and from the vowed religious life.
Posted by Józef Jan Hughes at 9:31 AM