Another emotional memory from my years-ago trip with Uncle Jim and Aunt Phoebe was visiting the grave of my great-grandmother, Franciszka Bambenek (1871-1896) at St. Mary's Cemetery in Winona. I knew that Grandpa Bambenek's mother had died very young, and that he was raised by his father Charles (1866-1937) and stepmother Anna Malotka (1877-1943) Bambenek. The only other thing I really knew about my great-grandmother Bambenek was her maiden name, and even that was complicated: it could be spelled Negowska, or Niegowska, or Nygowski, or even Negler. We Poles have some strange ideas about orthography. 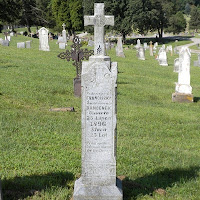 Uncle Jim and Aunt Phoebe had paid to have Great-Grandmother Bambenek's grave marker restored. The cross on top and the inscription were restored. The inscription has since faded somewhat, but is still quite legible. "Here lies Franciszka, of holy memory, wife of Karol Bambenek. Died 25 July 1896, aged 25 years. Please, believers, say a Hail Mary for her soul." It so happens that I had been looking for her grave on and off for half an hour and was in fact saying a Hail Mary when I found it. Thanks to the Pomorskie Towarzystwo Genealogiczne, I have since been able to trace the 1871 baptism, in Koscierzyna, Poland, of one Francisca Julianna, daughter of Jacob Nygowski and Josephina (Burant) Nygowska. An exact match!

Francisca Julianna joined two older brothers, Valentine (b. 1864) and Joseph Andreas (b. 1865). Grandpa Bambenek had an uncle named Valentine Negler, (1864-1949) who lived at the Bambenek home at 578 East Fifth Street in his last years, and actually died there. Again, an exact match. I have also since found that Jacob Nygowski died on February 8, 1872 in Koscierzyna, aged 33. Josephina Burant Nygowska also died in Koscierzyna, aged 42, in 1883. According to a 1929 article in the Winona Daily Republican, Valentine came to the United States in that same year. Franciszka followed him to Winona two years afterward. Joseph remained at home and became the postmaster of Elbing, Germany; however, Joseph's children Teofil, Lucille, and Martha migrated to Winona in 1922.
Posted by Józef Jan Hughes at 2:04 AM