Twenty years ago, my Uncle Jim and Aunt Phoebe Bambenek were good enough to spend a whole day carting me all around Trempealeau County, pointing things out and telling me stories about the good old days. I managed to get pretty much all of it down in my journal, too... everything except the part about the Dywan family. They were relatives on Grandpa Bambenek's side, a widow and her sons, one of whom (if I recall right) was really keen on drinking milk. "Dywan and milk." I can hear Uncle Jim saying it even now. But who on earth were these Dywans? 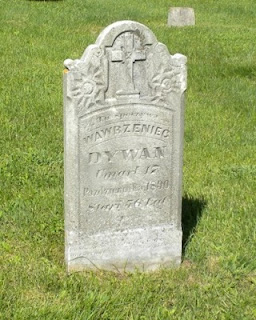 The family tree that Uncle Jim Bambenek and Aunt Frances Rettkowski drafted 25 years ago listed one Margareta Dywan as a sister of my great-grandfather Charles Bambenek. At St. Mary's Cemetery in Winona, there is the grave of Wawrzyniec (that's the Polish spelling of Lawrence) Dywan, who died on 17 October 1890, aged 56 years. The awesome Winona Newspaper Project shows no obituary for Wawrzyniec Dywan, but does record the deaths of Joseph (13 September 1893), Margaret (2 February 1922), John (6 December 1948), and Peter (18 June 1953) Dywan. The awesome WNP also records the extremely interesting circumstances accompanying Joseph's burial - but that has to be saved for a separate post. I suspected, but could not satisfactorily prove, that Wawrzyniec Dywan was the husband of Margaret Dywan (nee Bambenek). Wawrzyniec would have been eight years his wife's junior, but then, I'm married to a cradle robber too. And very happily so. The rest of my hypothetical timeline worked perfectly. Both John and Peter Dywan are mentioned as having come from Poland with their parents around 1875, which fits the time frame of the Kaszubian emigration.

Thanks to the Pomorskie Towarzystwo Genealogiczne (Pomeranian Genealogical Association), I was able to find in the records from Leśno (that is, the Bambeneks' ancestral stomping grounds) the 1832 baptism of Laurenz Dywan, son of Anton and Victoria Cyszewska Dywan. Granted, that is a couple of years off from the grave marker at St. Mary's, but things like birth dates are easy to misremember during the planning of a funeral. On the other hand, the Lesno records also show the 1827 baptism of Margaritha Bembenek, daughter of Blazej and Marianna Wielewska Bembenek. That checks out perfectly with the Winona Republican-Herald obituary. I think we have a match!
Posted by Józef Jan Hughes at 10:37 AM