At left is a picture of my maternal grandfather, standing on the Minnesota side of the Burlington Route/Green Bay & Western Winona bridge some time in the 1930s. 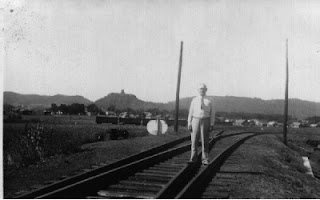 Some time before World War One, my great-grandfather Charles Bambenek had the job of delivering a steam saw to a sawmill in Dodge, Wisconsin. He was also tasked with teaching the sawmill's owner, Jacob Pellowski, how to use it. He brought his oldest son John along for company; Jake Pellowski had brought his daughter Laura along to keep him company as he waited for his new saw. The two young ones hit it off, and pretty soon John was hopping trains across the bridge on Fridays, to spend weekends on the Pellowski farm in Dodge - helping with the chores and courting his future wife. In 1914 they were married at Sacred Heart Parish in Pine Creek, Wisconsin. 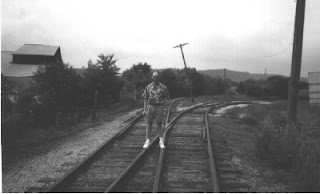 At right is a picture of yours truly in basically the same place, taken in 1994 by my beloved wife. According to GreenBayRoute.com, the bridge's middle span burned in 1989 and it was demolished in 1990. It was hard to believe then that I was standing in the same place where my grandfather had hopped trains to go courting my grandmother. It is hard to believe now that the picture of me standing by the Winona railroad bridge is itself now fourteen years old.
Posted by Józef Jan Hughes at 9:53 PM