Winona's Kashubian Polish community grew rapidly during the 1870s. The first generation had settled in and was raising families - usually very large ones. Meanwhile, the pace of emigration from the Old Country picked up rapidly after the German Empire was established in 1870. Under the Iron Chancellor, Otto von Bismarck, Poland was subjected to active Germanization. Moreover, Bismarck declared a feud with the Roman Catholic Church - the so-called Kulturkampf. It was a better than ever time to leave the Old Country, and many Kashubians did just that. Pretty much all of the decent farmland near Pine Creek had been bought up. Starting in the middle to late 1870s, some Kashubian families migrated further west into Minnesota, or even into the Dakotas. Those newcomers who remained in Winona were only to happy to take whatever jobs they could get - even in the Stockton Quarry. 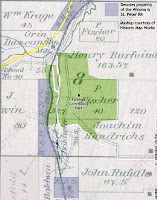 Winona's first railroad, the Winona and St. Peter, was established in 1862 and bought out by the Chicago and North Western Railway in 1867, although it kept its name until around 1900. Sold to the Dakota, Minnesota and Eastern in 1986, it is now the property of the Canadian Pacific. As originally built, it twisted and turned its way up through the Stockton Valley to the prairie beyond. The tracks were continually improved; after 1880, numerous trestles were either filled in with gravel or replaced by massive stone arches such as the pair at Farmers' Community Park. The Stockton Quarry, located across the railroad tracks from what is now the park, provided much of this stone. Getting to and from work was an issue - the quarry was 11 miles away from downtown Winona. Even by special train, it took time.  Digging the stone out and either crushing it for gravel or making blocks of it was dangerous work. So was transferring the finished product to the work sites, which required the construction of a narrow gauge railroad with its own miniature locomotive. 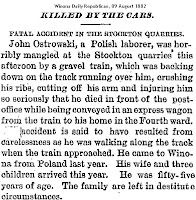 The finished results - bridges like the famous "Arches" - were beautiful, but costly in human life. On 23 December 1881, the newly-arrived Walenty von Zuroch Czapiewski suffered massive internal injuries when a bank of clay collapsed on him at the Stockton Quarry. He died at home the next day: Christmas Eve. On 9 August 1882, Jan Ostrowski was run over and "horribly mangled" by a gravel train. He was transferred to Winona by train but died in a wagon as he was being brought home. Finally, on 2 January 1883, Jozef Bambenek had his right arm and right leg crushed when he was thrown from a gravel car and run over. His mangled limbs were amputated after he was taken home. The standard of medical care was obviously appalling; I'm sure he died of his injuries but I have not yet been able to tell exactly when. The Stockton Quarry evidently shut down for good around 1906, with no further fatalities I have been able to discover. But obviously it remained a very dangerous place to work, and serves as an illustrations of how hard the Kashubians of Winona had to work just to survive.